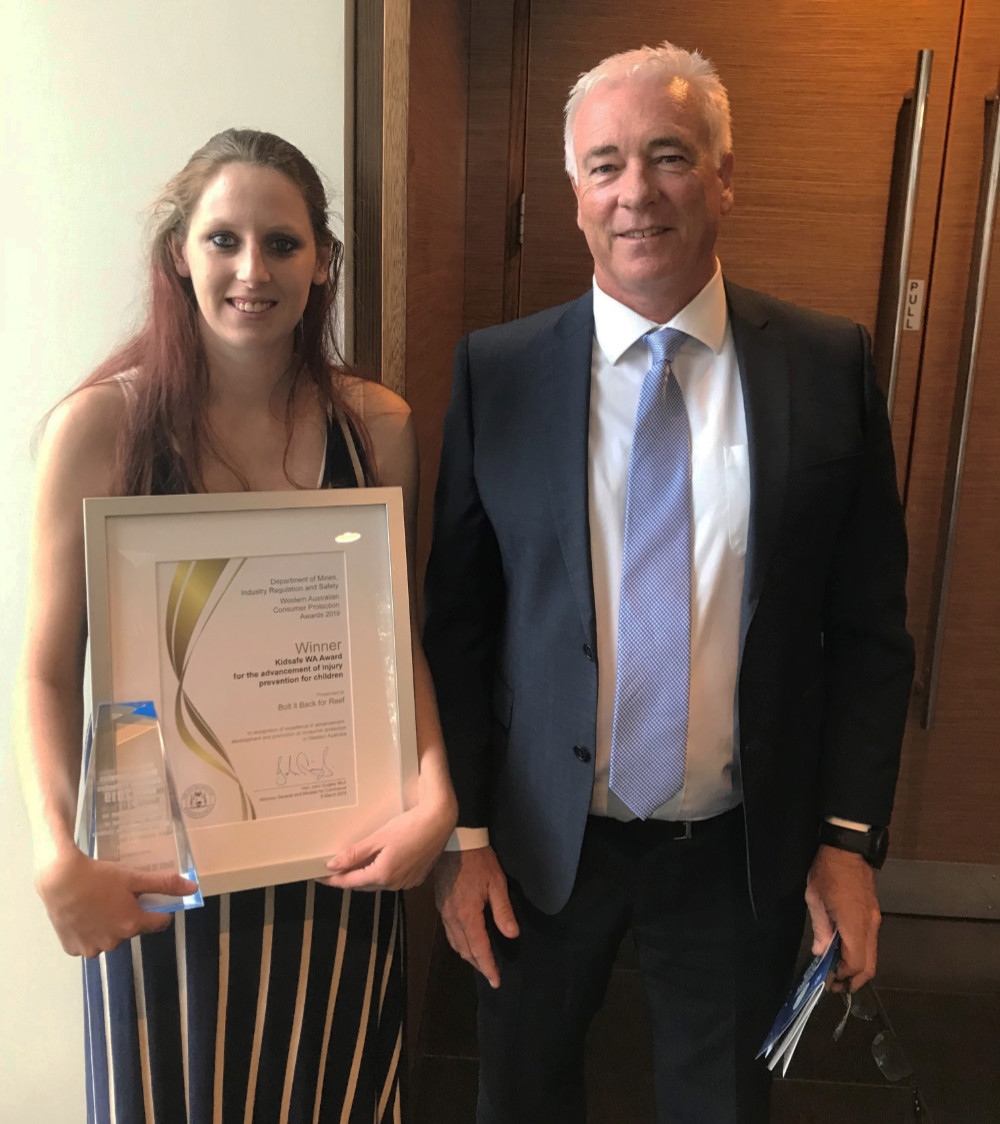 Promoting consumer product safety is a key factor in preventing childhood injuries and is a major component of the operations and activities of Kidsafe WA. Kidsafe WA also plays a key role in developing product safety policy and regulating traders in the state.

One award that makes up the Consumer Protection Awards is the Kidsafe WA Award. The Kidsafe WA Award acknowledges those in the community that have made a significant contribution to childhood injury prevention. It particularly recognises those who contribute to raising awareness of specific products hazards, designing new products that improve consumer safety and developing or delivering initiatives that raise community awareness of injury prevention issues for children.

This year the Kidsafe WA award went to ‘Bolt it Back for Reef’. Reef Kite tragically died in October 2015 after a set of drawers fell on him. His mum,
Skye Quartermaine, had asked her landlord permission to anchor the drawers to the wall, but was not given approval. Reef’s aunty, Dee Quartermaine, started the Bolt it Back for Reef Facebook page to share his story. The page now has over 2,000 members and is used to raise awareness of dangers, share tips on restraining furniture and answer questions. Dee and Skye have campaigned for law changes that would allow tenants to anchor furniture without requiring landlord approval, provided any damage is repaired.

The WA Coroner’s Report into Reef’s death made this recommendation and a bill was introduced in parliament in October 2018 to amend the Residential Tenancies Act. Congratulations to Bolt it Back for Reef for their amazing efforts in child injury prevention.

A Special Commendation was also given as part of the Kidsafe WA Award to Melanie Mitchell for her work in drowning prevention. Melanie launched Lachlan’s Legacy in honour of her almost 3 year old son Lachlan who died after drowning in a backyard pool at a family day care in 2015.

Congratulations to the winners and finalists of the 2019 Consumer Protection Awards and many thanks to all the nominees for their dedication to advancing consumer protection and injury prevention for children in Western Australia.