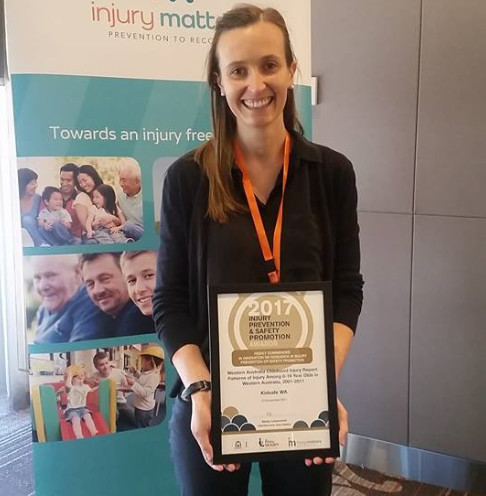 Kidsafe WA recently received a Highly Commended Award at the Injury Prevention and Safety Promotion Awards, run by Injury Matters and Know Injury. Kidsafe
WA received the award in the category of “Outstanding Achievement in Innovation or Research in Injury Prevention or Safety Promotion” for the Western Australia Childhood Injury Report: Patterns of Injury Among 0-19 Year Olds in Western Australia, 2001-2011.

The WA Childhood Injury Report was prepared by Kidsafe WA in partnership with the Epidemiology Branch of the Department of Health WA and the Injury Surveillance
Unit at the Princess Margaret Hospital Emergency Department. The report examines a ten year period from 2001-2011 and provides an overview of unintentional
and intentional childhood injuries in Western Australia in comparison to the previous reporting period from 1989-2000. Additionally, it includes regional,
national and international comparisons. The report aims to support the work of key childhood injury prevention stakeholders, health practitioners,
policy-makers and researchers to reduce the burden of childhood injuries in Western Australia.

Thank you to all involved in the project, and thank you to Injury Matters for hosting the awards to commemorate the initiatives and programs happening
across Western Australia to prevent injury and promote safety. Congratulations to all nominees and winners of the Injury Prevention and Safety Promotion
Awards.